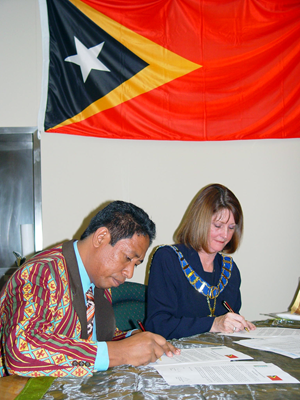 Manatuto District Administrator Sr Elvino Bonaparte do Rego and City of Kingston Mayor Topsy Petchey signing the Memorandum of Understanding on behalf of the two communities at a reception in Kingston in 2005.

History of the Friends of Manatuto (FoM) Friendship Program

• 2000 – Robyn Erwin, a resident of the City of Kingston in Victoria contacted the city council proposing the formation of a Friendship group within Kingston and supported by the City of Kingston. Subsequently meetings were held with representatives of council and CNRT.

• 2002 – A community meeting was held resulting in a letter to the administrator of Manatuto describing our intentions.
The Friends of Manatuto formed a Friendship with the sub-district of Manatuto.

• 2003 – visit of two council officers to Manatuto to learn about the situation in Manatuto and consider options for ways to support the Manatuto community and for the Friendship to proceed.

• 2005 – supported the visit of Manatuto District Administrator Sr Elvino Bonaparte Do Rego to the City of Kingston, including exposure to local government systems, schools and kindergartens and attendance at ‘Cooperating with Timor Leste’ conference. A reception was also held at which a formal Friendship Agreement was signed between the City of Kingston and the Sub-District of Manatuto.

• 2007–2010 – provided funding for the construction of a pre-school (kindergarten) building in Obrato adjacent to the Obrato Primary School. Funds were provided to the District Administration, who subsequently managed the construction process. The kindergarten teachers were selected and received additional training.

• Aug 2010 – The pre-school is finally open and operational with 47 children enrolled.

The Friends of Manatuto are working towards the teachers being paid and the pre-school being fully managed by the Timor-Leste Ministry of Education. The two local teachers continue to be supported in ongoing professional development, and resources to the pre-school.  The Obrato pre-school is regarded as a model pre-school in Timor-Leste and was selected to participate in the trial of the Mother Tongue teaching project. There are currently around 60 students enrolled.

More recently we have been assisting the Manatuto Hospital and Maternity Clinic with resources, following requests from staff. We have provided around $1000 of equipment including basics such as stethoscopes, blood pressure machines, thermometers, baby heart monitors, breast pumps and mothers’ packs supplied through Alola Foundation.

The Friends of Manatuto are currently investigating the possibility of rewiring of the hospital and clinic as, despite now having consistent electricity, most of the lights and fans etc do not operate.